Examples of where to find your Toyota 4x4 model number

Your model number can be found on your VIN or chassis identification plate. See below: 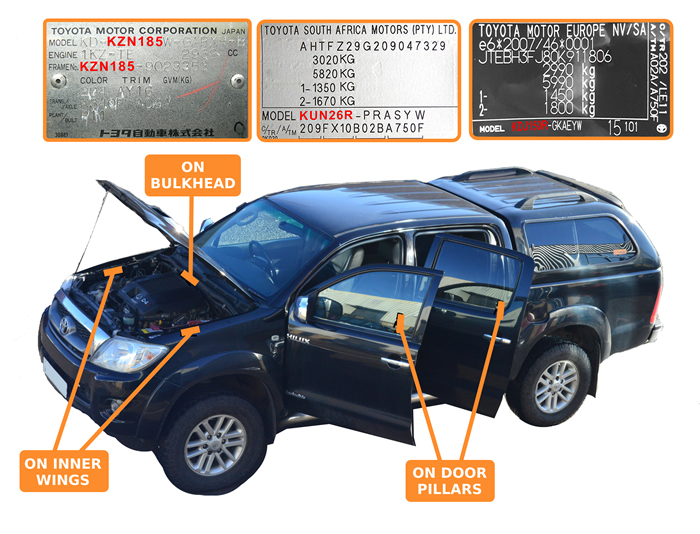 Where can I find my model number

On later models the metal chassis plate was changed to tamper proof stickers.
A model number usually consists of letters and numbers please see the examples of chassis plates below; 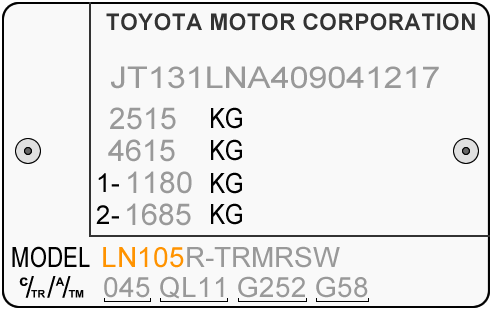 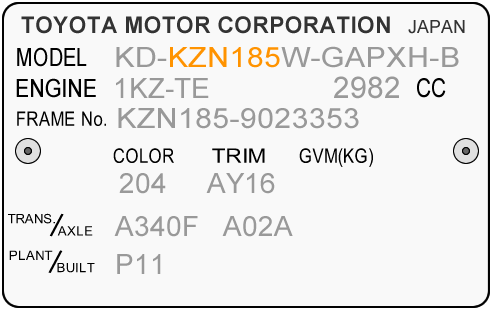 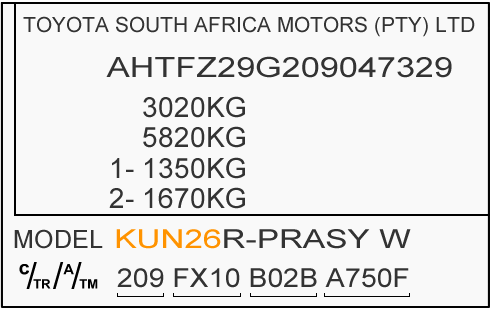 Originally the chassis plate could be found under the bonnet riveted to the center of the bulk head below the window. On later models Toyota changed the positions of the tamper proof sticker. The main positions were located to the left hand front inner wing under the bonnet, and usually on the latest models to just inside the left hand side rear door.
Other areas the VIN & model number can be found which will be required when ordering parts with RoughTrax are;

What is a model number

Every Toyota vehicle has a model number when the vehicle enters production. The model code is not the same as the VIN.

Only the basic model code is required when ordering parts with RoughTrax which is usually 5 or 6 letters and numbers long, for example a Hilux Pickup can be KUN26.

Model numbers are specifically required when ordering parts with RoughTrax, if you are unsure what model number you have or your model is not listed under our model selection please contact RoughTrax by email info@roughtrax4x4.com or telephone +44(0)117 986 9065 and we will be happy to assist you with any model queries you may have.

What is a vehicle identification number (VIN)

The VIN number or sometimes called chassis number is your vehicle’s legal identifier, and is applied to your car at the moment it enters production and can be found on the vehicle registration document (V5).

Each VIN number is unique, and is usually a 17 character code made up of letters and numbers, and reveals important details about your vehicle. It is usually only needed when ordering parts with a Toyota dealership to enter your vehicle on to the electronic parts catalogue.

As well as containing information on the time and place of your car’s creation, it also contains information about the car’s specification and design.
While registration plates can be changed, or personalised, the car’s VIN number remains unchanged, and is best thought of as the primary identification number for your Toyota.

What is a frame number

Some of the early imported vehicles generally have a frame number instead of a 17 digit VIN number stamped in to the chassis plate, on later models it is printed on a tamper proof chassis sticker.

A frame number consist of the model number then 7 numbers, they usually start with a zero or a nine. This is the production number used by the manufacturer to identify the individual vehicle which determines the manufactures production date, colour code and trim code. It may include information on other options installed to the specific vehicle. This is unique to each vehicle and the manufacturer use their own sequences and is often is a simple sequential number.

The frame number is stamped into the chassis and is the equivalent to a VIN number; therefore frame numbers are often called VIN or chassis numbers for imported models.

As well as containing information on the time and place of your car’s creation, it also contains information about the car’s specification and design.
Below we explain the basics of decoding your Toyotas vehicle identification number.

Although there are exceptions to the rule, the first three digits usually refer to the country of manufacture, the vehicle maker and the vehicle type.

For example, if you check the first letter of the code, you’ll see J references Japan, S references England, while V identifies France. Turkey gets an N, while Thailand and South Africa get an M or an A; this is where most of the new Hilux’s are produced.
On earlier models the second letter is usually T, which describes Toyota, the third describes which group of cars (or sometimes which chassis type) the vehicle sits on.

The next six numbers reference the car’s body style and engine and gearbox, while the remaining eight are combination unique to the car, listing the year the car was made, the factory it was produced in and where it came in the production process.

The variations between each Toyota 4x4 model

Toyota first encountered a taste in the 4x4 market in 1954 when production started on the Toyota Land Cruiser. 1968 was the beginning of the compact Toyota Hilux Pickup later followed by the Toyota Hilux Surf & Toyota 4Runner in 1984.

Toyota is famous for being extremely durable and reliable; many of the early trucks are still on the road today. Some with over 500,000 miles clocked up.

Below is an introduction of the Toyota 4x4 model variations of the Hilux Pickup, Hilux Surf also known as the 4Runner & Land Cruisers.

Over its seven generations, the Toyota Hilux pick-up has earned a reputation as one of the world’s most trusted and reliable commercial vehicles. Toyota’s indestructible marketing of the Hilux was tried and tested to many extremes. The BBC's Top Gear featured episodes of the Hilux that was deemed "virtually indestructible". Its reputation for near-indestructibility remains undiminished.
This ultra-tough machine has been proven in extreme environments such as the Arctic and Antarctic, while as Europe’s best-selling pick-up it is clearly the workhorse of choice for many.

The Hilux name was taken from a contraction of ‘high’ and ‘luxury’. The Hilux started production in March 1968, since then the Hilux has undertaken a radical redesign through the years. From 1975 it was designed producing medium to heavy duty commercial vehicles much like the Hilux we know of today with increased standard equipment on a long wheel base chassis.

It was the success of these early Hilux conversions that led directly to Toyota’s launch of the Hilux-based 4Runner and Hilux Surf.

The Toyota Hilux Surf is an off-road vehicle manufactured by Toyota and sold mainly in Japan, with large numbers imported as used vehicles to the United Kingdom, Ireland, New Zealand and Australia.

The original Surf was little more than a Toyota Hilux pickup truck with a fiberglass shell over the bed, but the model has since undergone significant independent development into a mid-size off-road vehicle.

The Land Cruiser is the longest produced vehicle in Toyota’s history. Originally the land cruiser was built for the armed forces and police in Japan just after world war two. Japan told Toyota to produce a light truck for Japan's military. The postwar Toyota "Jeep" BJ is completely different to what we know of today.

Important changes applied during the development years which saw the Land Cruiser close the gap between utility and luxury.

Through sixty years of continuous production and thousands of model variations it is the world’s most customer trusted vehicle and marked the foundation of Toyota’s development target of quality, durability and reliability.